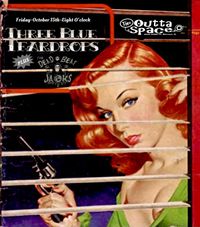 THREE BLUE TEARDROPS The Three Blue Teardrops are a hard rockin' three piece psycho rockabilly band from Chicago, IL. This rockabilly trio sends a blast of energy kickin' you off your seat, out from the sunbrella and into those dancin' shoes. Their blend of musical styles awakens the breakout of a new rockabilly sound. DEAD BEAT JACKS The Dead 💀 Beat Jacks is a group that plays interesting rock music from ballads to rippin' Rockabilly and Psychobilly. We focus mainly on original material, most with a dark tone and a campy sense of humor, often evoking the imagery of horror B-movies and comic books. Our music is influenced greatly by other artists such as The Reverend Horton Heat, The Creepshow, The Nekromantix, and The Koffin Kats, as well as many artists going as far back as the 50's & 60's. We feel that we have a unique sound that is a bit different, which remakes the songs we cover as our own. Our music has something for everyone, while holding true to the feels and sounds that inspire us.